By disguising multimillion-dollar SEIU organizing operations as grassroots “worker centers,” SEIU deceives employees and the public. As part of a campaign of fake “fast food strikes,” P.R. consultants paid an annual seven-figure retainer by the SEIU are leading an effort to extend SEIU’s top-down un-democratic unionization scheme to the restaurant industry.

As part of the “Fight for 15,” SEIU has spent somewhere between $29 million and $57 million on P.R. consultants; “worker centers,”; and “Worker Organizing Committees” or “WOCs,”  registered “labor organizations” that pass funds from SEIU headquarters to worker centers. Using federal labor filings, we can confirm that the WOCs—purportedly grassroots organizations powered by employee rage—are headed by SEIU staff and officials. Some of the most prominent WOC leaders receive six-figure salaries from SEIU national headquarters: “Fight for 15” organizing director Kendall Fells was paid $137,692 by SEIU in 2014, according to federal filings.

The SEIU uses worker centers and WOCs to hold so-called “fast food strikes,” demonstrations outside fast food franchises that have involved more left-wing professional activists than actual workers walking off the job. The Associated Press reported about a rally in New York in 2014: “[It] wasn’t clear how many participants were fast-food workers, rather than campaign organizers, supporters or members of the public relations firm that has been coordinating media efforts.”

Based on an analysis of SEIU’s federal disclosure filings to date, the campaign has had a minuscule effect on SEIU membership, while spending on the “worker center” groups, public relations consultants, lawyers, and organizing committees involved in the campaign has steadily increased. 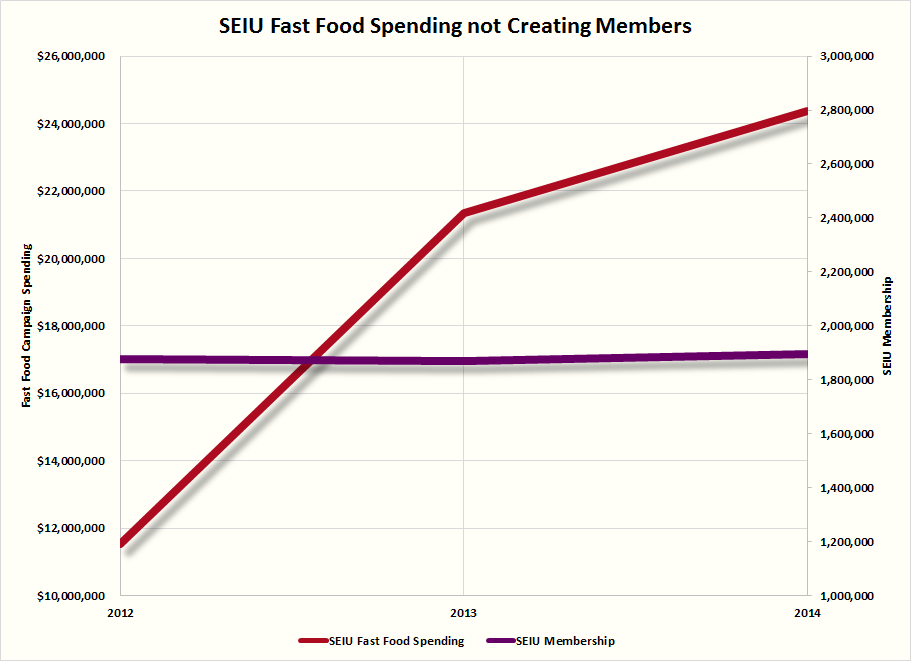 In total, SEIU has directed somewhere between $24 million and $57 million toward the campaign.

Berlin Rosen (BR) is a political consulting firm that serves labor unions and union-friendly politicians (most notably NYC Mayor Bill de Blasio). The SEIU has retained BR to lead the campaign, an effort BR brags about on its website.

In 2014, SEIU national headquarters, local unions, and regional councils paid over $2.7 million to the consultant group.

The effect of millions in SEIU funding over a period of years to the consultancy was reported in late 2013 by labor movement newspaper In These Times. The paper reported that organizers said that Berlin Rosen was responsible for the SEIU campaign’s communications strategy and that BR operatives were “helping in every spot” the campaign operated.